skip to main | skip to sidebar

In reference to Microglia and Pain: A Manual Therapy Perspective: Part I:

In general, glia keep things running smoothly. Astrocytes make sure the synapses are working properly - duties include the regulation of ions to maintain optimal chemical stability in the extracellular fluid, sopping up and storing excess neurotransmitters such as glutamate, buffering K+, and storing glycogen, feeding the neurons with it when a burst is suddenly needed in a given region. They occupy physical space between neurons and capillaries, keep the blood supply and the neurons apart from each other. Oligodendrocytes in the CNS, and their cousins, the Schwann cells in the periphery, manufacture and maintain myelin coverage of their respective neurons. There are other kinds that do other jobs. (See image below and to right, modified from an article, The Dark Side of Glia (Science May 2005).) 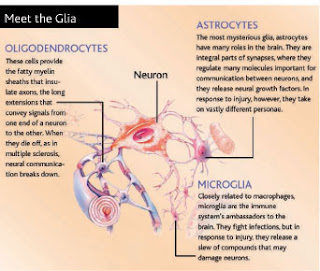 Microglia are the smallest of the glia, and (in my opinion) the most mysterious, not just because of their unconventional origins, but also their behaviour; mostly they just sit there, inactive, sessile, not bothering anything, making up 5-15% of the total glial population. Yet they sense everything, and are capable of “activation,” generating a big response to altered environment, which sometimes works well (to take care of invaders) and sometimes not so well (from a pain point of view). They have many kinds of ion receptors - when their environment provides them with sufficient chemical provocation, they change their morphology and begin to mobilize, amoeba-style, drawn to sites of infection or where damage has occurred, where the blood-brain barrier has been breached by injury or vascular failure.

In the brain they act the way macrophages do in the outer body, absorb invaders and corpses, but there is a not-so-good side to all this: the nervous system is generally not used to having these little creatures moving around in it, and sometimes seems to have trouble adapting when they become active. Why should this be?

It is easier to understand if we consider what happens in an ecosystem when scavengers find sustenance in it:

1. First, they will reproduce rapidly. Think of flies on a carcass - soon there are many more flies buzzing around. In the brain and spinal cord, microglia, like the single-cell “creatures” they are, reproduce enormously when times are good - from their perspective. But the CNS, the spinal cord, is an enclosed space, without a lot of room for a burgeoning population of microglia, no matter how small they may be.

2. Microglia and their population explosion alter the chemical environment the nervous system has been used to. Think of excretion (flyspecks) left in their wake - the nervous system is already injured, and now it must adapt to a new chemical environment (polluted in a sense) on top of everything else. Substances released include cytokines, chemokines, trophic factors etc., some of which the neurons can use like “fertilizer” to grow with, others of which merely irritate them.

3. When this sort of “plasticity” occurs in the spinal cord, nociception becomes upregulated.

4. When the brain is exposed to such upregulation, depending on context, it might not succeed in successfully downregulating it back to normal.

The rest of this piece will concern itself with points 3 and 4.

In Wall and Melzack’s Textbook of Pain (5th ed.) is a discussion about defining neuropathic as opposed to neurogenic pain. Microglial activation is associated with neuropathic pain which is in turn associated with neuronal damage. In general, from our perspective, we could consider neurogenic pain as more easily downregulated with manual therapy, because there is no irreversible nerve damage - the neurons and dorsal horn can recover. What we do with our contact, both verbal and manual, likely assists nervous systems to increase descending modulation to help decrease perceived pain. Possibly this is sufficient for a system with mere neurogenic pain to right itself, and microglial populations presumably go back to normal levels eventually. Neuropathic pain, or pain felt in the context of actual neuronal or dorsal horn damage due to injury, infection, or ongoing metabolic insult, is less likely to right itself with manual therapy - in fact, manual therapy may worsen matters instead. Luckily for us, at a glance it would seem that there is more neurogenic pain in the population than there is frank neuropathic pain. In the book, the authors conclude that there is no real dividing line yet - that there is a big area of overlap. This is frontier land. We must learn optimal ways to sort out the two main kinds of pain, in the clinic, based on close listening to a patient’s pain history, or risk adding to pain felt by some.
Posted by Diane Jacobs at 6:17 AM